Static analysis allows you to find problems before executing a single line of code. It’s a powerful tool used to prevent bugs and ensure that code conforms to style guidelines.

With the help of the analyzer, you can find simple typos. For example, perhaps an accidental semicolon made its way into an if statement:

The analyzer can also help you find more subtle problems. For example, perhaps you’ve forgotten to close a sink method:

In the Dart ecosystem, the Dart Analysis Server and other tools use the analyzer package to perform static analysis.

You can customize static analysis to look for a variety of potential problems, including errors and warnings specified in the Dart language spec. You can also configure the linter, one of the analyzer’s plugins, to ensure that your code complies with the Dart Style Guide and other suggested guidelines in Effective Dart. Dart tools such as the Dart dev compiler (dartdevc), dartanalyzer, flutter analyze, and JetBrains IDEs use the analyzer package to evaluate your code.

This document explains how to customize the behavior of the analyzer using either an analysis options file or comments in Dart source code. If you want to add static analysis to your tool, see the analyzer package docs and the Analysis Server API Specification.

Note: The analyzer error codes are listed in the Dart SDK repo.

Place the analysis options file, analysis_options.yaml, at the root of the package, in the same directory as the pubspec file.

The include: url entry brings in YAML code from the specified URL — in this case, from a file in the pedantic package. The linter: entry enables linter rules. You can use the analyzer: entry to customize static analysis — enabling stricter type checks, excluding files, ignoring specific rules, or changing the severity of rules. Another tag you might see is language:, which is used for experimental language features.

YAML is sensitive to whitespace. Don’t use tabs in a YAML file, and use 2 spaces to denote each level of indentation.

If the analyzer can’t find an analysis options file at the package root, it walks up the directory tree, looking for one. If no file is available, the analyzer defaults to standard checks.

Consider the following directory structure for a large project: 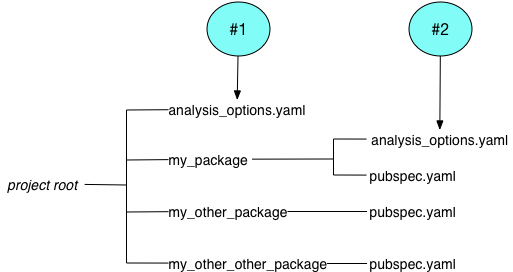 If you want stricter static checks than the Dart type system requires, consider using the implicit-casts and implicit-dynamic flags:

You can use the flags together or separately; both default to true.

implicit-casts: <bool>
A value of false ensures that the type inference engine never implicitly casts to a more specific type. The following valid Dart code includes an implicit downcast that would be caught by this flag:

implicit-dynamic: <bool>
A value of false ensures that the type inference engine never chooses the dynamic type when it can’t determine a static type.

The analyzer package also provides a code linter. A wide variety of linter rules are available. Linters tend to be nondenominational—rules don’t have to agree with each other. For example, some rules are more appropriate for library packages and others are designed for Flutter apps. Note that linter rules can have false positives, unlike static analysis.

To enable the list of linter rules that Google uses in its own Dart code, depend on the pedantic package and include its analysis_options.yaml file. Unless you need to use the pedantic API, declare a dev dependency on pedantic in your pubspec.yaml file:

Run pub get, and then add the following line to your analysis_options.yaml file:

To enable a single linter rule, add linter: to the analysis options file, followed by rules:. On subsequent lines, specify the rules that you want to apply, prefixed with dashes. For example:

Sometimes it’s OK for some code to fail analysis. For example, you might rely on code generated by a package that you don’t own—the generated code works, but produces errors during static analysis. Or a linter rule might cause a false positive that you want to suppress.

You have several ways to exclude code from analysis:

You can also change the severity of rules.

To exclude files from static analysis, use exclude: in the analysis options file:

You can specify a group of files using glob syntax:

Suppressing rules for a file

To ignore a specific rule for a specific file, add an ignore_for_file comment to the file:

This acts for the whole file, before or after the comment, and is particularly useful for generated code.

To suppress more than one rule, use a comma-separated list:

Suppressing rules for a line of code

To suppress a specific rule on a specific line of code, preceed that line with an ignore comment:

Here’s example of ignoring code that causes a runtime error, as you might do in a language test:

To suppress more than one rule, supply a comma-separated list:

Alternatively, append the ignore rule to the line that it applies to:

Each analyzer error code and linter rule has a default severity. You can use the analysis options file to change the severity of individual rules, or to always ignore some rules.

You can ignore specific analyzer error codes and linter rules by using the errors: field. List the rule, followed by : ignore. For example, the following analysis options file instructs the analysis tools to ignore the TODO rule:

Changing the severity of rules

You can globally change the severity of a particular rule. This technique works for regular analysis issues as well as for lints. For example, the following analysis options file instructs the analysis tools to treat invalid assignments as warnings and missing returns as errors, and to provide information (but not a warning or error) about dead code:

Use the following resources to learn more about static analysis in Dart: