The Dart SDK has the libraries and command-line tools that you need to develop Dart apps. To learn about other tools you can use for Dart development, see Dart Tools.

Note: This site’s documentation and examples use version 2.2.0 of the Dart SDK.

As the following instructions show, you can use a package manager to easily install and update the Dart SDK. Alternatively, you can build the SDK from source or download the SDK as a zip file.

Dart tools may send usage metrics and crash reports to Google. By downloading the Dart SDK, you agree to the Google Terms of Service. Note: The Google Privacy Policy describes how data is handled in this service.

Choose one of these options:

To use Chocolatey to install a stable release of the Dart SDK, run this command:

To install a dev release, run this command:

Alternatively, use the community-supported Dart SDK installer for Windows. You can use the wizard to install stable or dev versions of the Dart SDK. 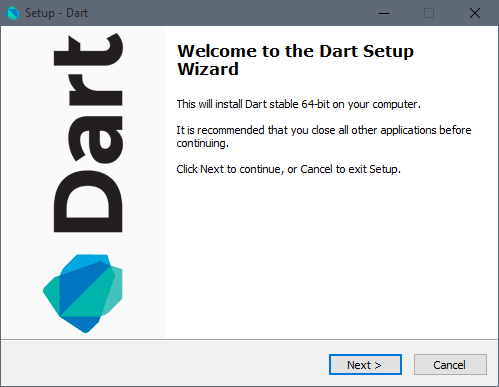 If you’re using Debian/Ubuntu on AMD64 (64-bit Intel), you can choose one of the following options, both of which can update the SDK automatically when new versions are released.

Then install the stable release of the Dart SDK:

Or, to install the dev release of the Dart SDK, run the one-time setup commands followed by:

After installing the SDK, add its bin directory to your PATH. For example, use the following command to change PATH in your active terminal session:

To change the PATH for future terminal sessions, use a command like this:

Install homebrew, and then run:

To install a dev channel release, use --devel:

To upgrade when a new release of Dart is available run:

To install a stable channel release when a dev release is currently active, run:

To upgrade to a dev channel release when a stable release is currently active, run:

If you aren’t sure which versions of dart you have installed, then run:

The command output lists the latest stable and dev versions at the top, followed by your locally installed versions.

What’s in the SDK

The Dart SDK includes a lib directory for the Dart libraries and a bin directory that has these command-line tools:

For more information about the SDK, see its README file.

About release channels and version strings

Warning: To give you early access to new features and fixes, dev channel releases are not as heavily tested as the stable release.

Stable channel releases of the Dart SDK have version strings like 1.24.3 and 2.0.0. They consist of dot-separated integers, with no hyphens or letters.

Dev channel releases of the Dart SDK (pre-releases) have additional characters, starting with a hyphen (-). For example, Dart 2 pre-releases have version numbers starting with 2.0.0-dev such as 2.0.0-dev.69.5.

To see existing issues or create a new one, go to dartbug.com. Here are some handy searches: